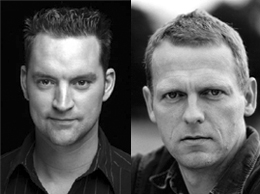 Steckbrief Mike Bernardin:
Actor, director and acting-coach Mike Bernardin, lives with his wife and their four children in London. As an actor he worked with the Royal National Theatre, did numerous plays and musicals in the London West End, and toured with different companies. Mike Bernardin is a founding member and the artistic director of the Fer’vent Theatre Company, London, which opened 2001, for which he most recently directed John Steinbeck’s “Of Mice and Men”, Shakespeare´s “12th Night” and David Mamet’s “Oleanna”. Mike Bernardin is one of the most experienced and most popular Meisner teachers in England and has also held several workshops in France and Germany.

Interview Mike Bernardin
What specifically does practising the Meisner Technique change in an actor?
Meisner's proposal was to make actors work in partnerships at all times, getting them to respond as sensitively as possible to the nuances of the partner's behaviour. He used to say, "What happens to you doesn't depend on you, it depends on the other fellow." What he understood was this - when I am thinking about myself, conscious of myself, trying to get a particular result in my acting, I become stiff, clumsy and unhappy as an actor. By putting my attention elsewhere (initally on the other actor) I become free of many unnecesary anxieties and can concentrate on the action of the play. This sets up a much more truthful dynamic between actors, and is the root of all good ensemble playing. It also means that Emotion becomes a side effect, just as in life, flowing out of the unfolding events, instead of trying to be the event itself. For the actor this comes as great relief.
What is the main difference of the Meisner Technique as opposed to other Acting Techniques?
It's very important to remember that until Stanislavsky, there was no formal "technique" for actors, but even Stanislavsky didn't invent good acting. All the important techniques since his time owe much to his ideas and the american techniques, in particular, are all solidly based on his system. To be fair, there is clear common ground between all the strands of acting technique, if you look at how certain exercises are designed to help the actor. I think that Stella Adler and Michael Chekhov's work are much the closest in spirit to Meisner's. A big part of Meisner's work is in stimulating the actor's imagination (or "faith" as he liked to put it).
What is the difference between Strasberg and Meisner?
Strasberg insisted, as they all did, on real emotion on stage, and pushed actors to use any means to achieve it. But he seemed to especially favour memory recall as a way of making this happen. He took this to the extent of encouraging actors to trigger a memory in the middle of a scene in order to be gripped by the appropriate feeling at the correct moment. The principle of this seems fine, but in practice Meisner's objection to it was simple: if the actor has to work on his own emotions whilst on stage, how can he be present in the moment of the scene? Such a practice may produce tears, or anger etc, but it must inevitably dislocate the actor from the events around him. This didn't begin as a pedagogic debate - it was the experience of being directed by Strasberg in the Group Theatre of New York that made Adler and Meisner and others object. Of course Strasberg must have worked for a lot of actors, or they would have dropped it very quickly.

Would you call it a technique, which provides you with all you need for acting, or rather a training that builds the foundation for the acting but at the same time requests a certain level of acting skills?

It is absolutely crucial to understand Meisner as a teacher, and his techniques as training techniques rather than acting techniques. He was teaching for over sixty years, trying to lay down some clear foundational principles. He wasn't trying to create a new technique for acting. He wasn't even teaching "The Meisner Technique". Only from around the early Fifties did his ideas emerge as exercises in the form we see today. Meisner was working in a drama school - the Neighborhood Playhouse - and all his students were studying at the same time with other teachers (Martha Graham was the movement teacher!). He could concentrate on his core principles because many technical skills were being learned elsewhere in the building. I would say that a broad range of skills, especially in voice and movement, are essential to any actor, particularly for stage-work.

How and when did you come across the Meisner Technique?
I was studying at Mountview Drama school in London, in 1989, covering the usual broad range of actors' exercises; voice, singing, movement, text. Our acting coach was Paul Bardier, an american actor who had studied with Stella Adler, Uta Hagen and Sanford Meisner. At that time no-one in the UK had ever mentioned this man's ideas - they seemed completely revolutionary. They made immediate sense and seemed to answer many questions about when (and why) some acting seemed "impressive" and yet at the same time remained transparently inauthentic and unengaging. When our time at Mountview finished, a group of us petitioned (bullied!) Paul into setting up a private Meisner class. So every Monday night, if I wasn't in a show or on a tour somewhere, I was at class. That lasted about four years before Paul went back to the states.
How did you become a Meisner Teacher?
As a working actor I had already begun to teach other workshops (I had a strong training in DeCroux and LeCoq-based physical acting as well). I began to share some of what I had gained from my contact with Paul and it became clear that there was a real appetite for Meisner's work. I collaborated with another american director, Scott Williams, and began teaching alongside him. Scott had a different approach from Paul and I learned a lot about my own understanding of the technique by observing the differences. Since that time the industry in the UK has become much more aware of Meisner's ideas, even if its perception of them is not always accurate. Many teachers in the UK and even the main drama schools now offer some component of Meisner in their classes. I teach at several of them myself, as well as my work in Europe.
Do you think that German Directors / Actors put too little focus on rehearsal?

I have found German actors to be phenomenally committed and talented in class, so there is no problem with their work ethic! I do hear them say things that sound very familiar, much like in the UK. Sometimes it seems to them that they have to be like puppets, and that it is difficult to really own their performances. But if the actor gives in to that frustration, then the director is forced to become didactic because the actor becomes too reliant on direction. It is often a matter of ego, of course, but actually it's exhausting for a director to have to think of everything! Many directors, some without even knowing it, are desperate to work with actors who can bring brave and unexpected choices to their work. Of course for TV and film work, rehearsal is hardly an issue, except for the technicians and camera operators! So an actor needs to be able to make powerful creative choices with a minimum of external guidance and really trust their instincts. In rehearsal for stage the problem can be very big; many actors and directors work throughout the rehearsal period as if the idea was to gradually refine the play down to a fixed and definitive performance. This actually limits the creative imagination and prevents the possibility of surprises in rehearsal. It can also kill the eventual result - the actors reach Opening Night hoping that everything is perfect. Meisner would argue that the actor should throw him or herself into the central action of the play and let the moment be discovered freshly each time.