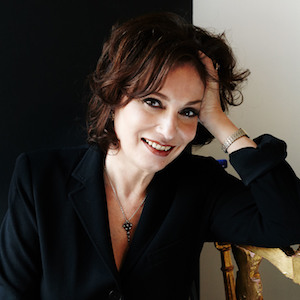 Images of the New York epicenter reach us every day. How are you?
I am well, though this virus has struck my daughter and some dear friends. Thankfully, they are recovering, though everyday I hear of more friends being afflicted and have lost some friends which is heartbreaking. NYC has become an existential nightmare.

What is your everyday life like in times of the pandemic?
I find it important to maintain a schedule for myself. Talking to friends and loved ones, Pilates, reading, writing, watching films, and following up on some casting work, speaking to directors, producers and agents, and always cleaning and hand watching!

Since when is there no more filming?
Filming shut down in March and we have no idea when it will resume. A film I am working on was set to shoot, but alas, though we are ready to go, we can’t until the situation improves.

What is the mood like among your casting colleagues?
We are all experiencing a new way of living and of working. It is difficult emotionally and financially . I think we worry, but mostly about the tragedy surrounding us and losing some colleagues. We would all like to contribute in any way we can, though this is often impossible as we are all isolating. We have a very social job, and personal contact makes us shine. We are struggling coping with this „new normal“.

How are the agents/managements?
All agents and managers are working from home. As all production has ceased, they too are in an insecure place. I must say that they have been generous in helping and working hard for the future.

Like the actors as a result of the shooting stop?
Actors are suffering. It is an insecure time for them not knowing the future of their projects. The best I can offer is future scripts for them to read and perhaps do self-tapes for upcoming projects. I hope they are able to find creative outlets.

Are you afraid of existence yourself?
This surreal existence causes fear and anxiety. These are dark times and learning to find joy in the smallest things and moments keep us hopeful and human. I feel like this virus is like a serial killer and he is stalking all of us. We are all at risk and vulnerable against this unseen killer. The isolation of being sick and alone is what frightens me the most.

What kind of aid funds are there for filmmakers?
None that I know of!

What kind of government aid is there for the industry?
Again, I don’t know of any. Any aid seems to be coming from the private sector.

What particularly moved you despite the crisis?
The sense of community we have tried to build and the love and admiration for the doctors, nurses, healthcare workers and other essential employees who are real heroes. Maintaining grace, dignity and empathy in light of this monstrous time is a challenge, but every small move in that direction is very fulfilling.

Thank you for the interview. Please stay healthy!